How Beats Affect the Brain

Music is a gift that holds the power to alter feelings and stimulate the brain. But why? The reason behind it lies in the brain. When the brain captures the sound of music, every known part of the brain is activated. The chemical reactions that take place in your brain are what make music seem so evocative, and change the way your brain functions.

In a study conducted in the Heidelberg University of Germany, students compared the brains of musicians to those of non-musicians in order to further understand the effect of music on the brain. According to this study, musicians were found to have better connected, more sensitive brains with superior working memory, auditory skills, and cognitive flexibility. The areas of the brain responsible for motor control, auditory processing, and spatial coordination were found to be noticeably larger, and the two sides of the brain were more symmetrical, meaning that the two sides were better at communicating with each other.

For those who don’t pursue music as their career, however, music can still hold great power and can vastly affect the brain, more specifically one’s mood.

“Music is a good outlet for when you’re stressed or anxious because it can take your mind off of your problems,” sophomore, Elena Ribeiro, said.

One of the ways in which music affects mood is by stimulating the formation of certain chemicals in the brain, such as dopamine. Dopamine is a neurotransmitter found in the brain which is closely related to adrenaline and plays an integral part of the pleasure-reward system. This chemical is responsible for the feel-good states one gets from eating chocolate, watching a funny movie, or exercising. Interestingly, music can trigger dopamine boosts in the brain when a song starts playing, thereby

“Music is relaxing when I am trying to take my mind off of things, and I usually use it as an outlet to relieve any stress I may have,” sophomore, Valeria Ramirez, said.

Listening to music with others has also been found to boost oxytocin levels. Oxytocin is called the “trust molecule” and the “moral molecule” since it helps humans trust and bond with others. Because of the increased levels of oxytocin in the brain when listening to music, social interaction is often easier, and can, therefore, make someone seem more trustworthy.

“I like to listen to music with my friends because its a good way to bond, and when music is playing, it makes everything so much more fun,” Ribeiro, says.

Oxytocin can play a large part in how generous or how trustworthy someone is, therefore relating back to the effect music can have on the brain, according to a neurochemistry student of Western Michigan University. Because of the increased levels of oxytocin in the brain when listening to music, social interaction is often easier, and can, therefore, make someone seem more trustworthy.

In regards to how music can affect the productivity of someone doing a task, background music has repeatedly been proven to enhance the performance of cognitive actions, improve accuracy, and enable the repetition of tasks more efficiently.

The effects of music on productivity have also been studied in specific occupations. According to a study conducted by Teresa Lesiuk, a student at the University of Windsor Canada, software developers were happier and produced better work more efficiently when listening to music. Similarly, when surgeons listened to music while operating, they were less stressed out and worked faster and more accurately, especially if they were allowed to pick the music.

The effect music has on the brain is so large that it is often used as a form of therapy. Marconi Union’s Weightless, for example, is a song designed to relax therapy patients and help them sleep. Its creation was a collaboration between musicians and a team of sound therapists who claim it to be the most relaxing song in the world. Listening to Weightless resulted in an impressive 65% reduction in anxiety by reducing heart rate, blood pressure, and levels of the stress hormone cortisol. In fact, this song is so relaxing that it’s not recommended to be listened to while driving.

The effect music has on the brain is so large that it is often used as a form of therapy.”

Contrarily, however, music can pose as a distraction when doing tasks which require more concentration and attention to detail.

There is no specific part of the brain designated to the processing of music or the processing of language and math. Although the general area in which information is processed is known to science, the brain is a complex system that is not yet completely understood. While the brain is known to primarily processes language in the left hemisphere of the brain, some of it is processed in the right side, and therefore some brain functions can clash with others.

This is an example that can be seen when reading a book. When reading books, specifically those that require detailed analyzing or imagination, the words in the book create a mood in the brain. Whether it may be a sad or a happy one, it’s almost as if the book has its own “soundtrack”. Books require the brain to imagine the setting and mentally listen to what characters are saying. This feeling of being immersed in a book, however, can often be ruined by simultaneously listening to music. The mood created by the music being played will often clash with that of the book, and will, therefore, make the overall comprehension of the book more difficult. 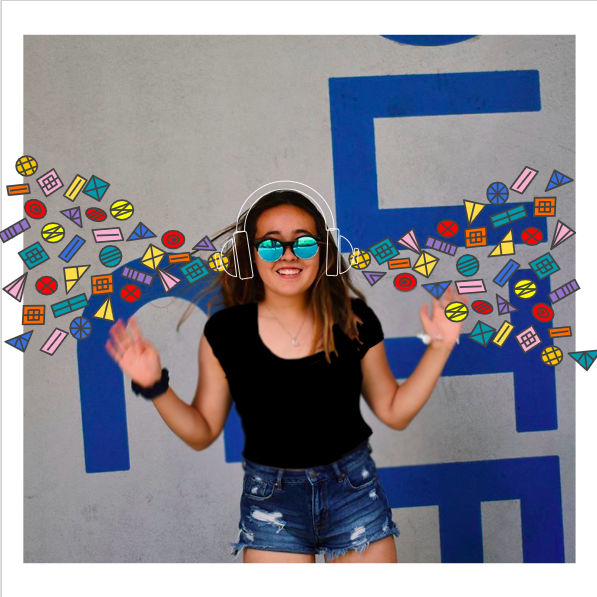 “Whenever I play music in my classroom, I play instrumental music as opposed to listening to music with lyrics, because I feel that lyrics can distract my students from their work” high school psychology teacher, Ethan Morgan, said.

He further explains that this is because when one listens to music with lyrics, especially a song that is known, he/she is more likely to pay attention to the words and sing along. This, therefore, redirects the focus from getting work done.

Music without words, therefore, is usually less distracting because the lack of words avoids the brain’s processing of information to clash with others. Because music is processed in the same region of the brain as that responsible for reading and writing, even music without lyrics, however, can still minimize the brain’s focus.

The evidence is clear – playing a musical instrument or listening to music can positively affect brain health and function, however, in order to maintain productivity while working, it must be regulated. The advantages of music are evident at all stages of life, improving mood, increasing intelligence, and enhancing learning and concentration. While it can sometimes pose as a distraction for some specific tasks, the effects music has on the brain are more beneficial than not. Music is an art form that serves as an international tool of communication. It is one of the few things that holds enough power to cross all boundaries of nationality, race, gender, and culture. Music is everywhere.

If you want a picture to show with your comment, go get a gravatar.