How much gaming is too much? 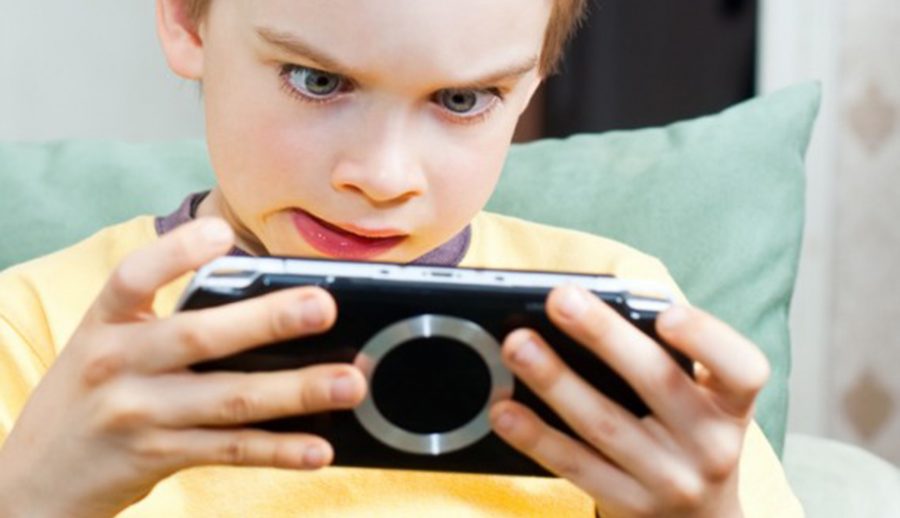 A child mesmerized by his video game(Star Guides Wilderness)

Gaming has become an extremely controversial topic in the world. Many people have spent years studying how long one should spend on their screens for entertainment in one day. The answer has varied throughout the years, but with technology becoming such a crucial part of a human’s everyday life, one is bound to wonder – “What is the true recommended amount of time to spend on a screen per day?” This answer cannot be given immediately. However, looking at the screen time of others is a good way to start answering this question. I have questioned three different people about how much time they spend on a screen every day – keep in mind that none of these numbers include time spent on academics.

The first person I interviewed was sophomore Deji Fagbayi. He said that he spends around 2 hours playing video games per day, and does not play during weekdays. Many experts consider this amount to be the ideal time to play video games per day. San Diego State University professor Jean Twenge believes that 1 to 2 hours is the safe limit for teens to game in one day.  Some may argue that this amount of time is too little, however, too much gaming can lead to an addiction. The effects of gaming too much do not impact Fagbayi.

The second person I interviewed was sophomore Krish Shah. He said that he plays around 2-4 hours of video games a day. However, he does not play most weekdays. “I play 4 out of the 7 days in the week,” said Shah. Experts say that this is just under the lowest level of addiction. According to the same study by San Diego State University, Twenge found that 5 hours of gaming per day is excessive. Therefore, Shah is playing just under an excessive amount of gaming. However, he is able to balance his gaming and academics perfectly in a way where he is not mentally impacted.

The third person I interviewed was sophomore Owen Flocks, who told me about how much he gamed over the summer. Flocks said that he played over 5 hours a day, and it was not good for him. He continued in saying that he only slept at around 5 A.M. some days, and it affected his sleep schedule. In his words, he turned “nocturnal”. Flocks believes that gaming that much is not good for him, and he lost his passion for playing for approximately a month, and needed to take a break. Currently, Flocks has completely fixed his excessive gaming problems and has returned to a normal sleep schedule. He was also able to transition to a better school schedule so that he only plays once he is fully finished with his work.

At the end of the day, it is clear that excessive gaming is not good for the human body, even if you are able to balance your school and gaming lives while doing so. The two most important things to keep in mind when reflecting on your screen time are how you are organizing your schedule and if you are keeping yourself healthy. If you are not fulfilling one of these categories, try to take a break to fully organize and reset yourself before you reset your headset.